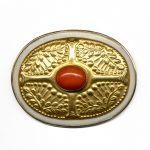 is the term for the jazziest period in the decorative arts. 1920-1940; the period between World War I and World War II or the interbellum, marked by turmoil as Europe struggled to recover, later prosperity and collapse, Roaring Twenties and Depression. The jewellery made in this period is often geometric and at it’s best rather colourful with dazzling gemstones and striking diamonds in different shapes, often set in platinum, but this is an example in gold. 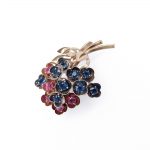 are names for the 1940’s and 1950’s fashion style for jewels. As a reaction to World War II, jewellery became bolder, sometimes still geometric but also more light hearted, with soft curves and feminine motifs, like ribbons and yes.. Flowers! Hollywood glamour was hugely influential, with bright gemstones in daring combinations. Rose gold was popular and the taste was chunky, but since (financial) resources were limited, jewellery was designed in a way that would achieve the greatest effect. As money was a questionable commodity, precious metal and gemstones seem a tangible and wearable alternative. Link to Cartier Retro Lilac.